It has been my honor to stand alongside Rev Kosky in our united efforts to fight against the forces of evil and to emancipate the African people from bondage. During ‘the struggle’, Rev Kosky would not back down or compromise his Christian convictions and values. He has been a great blessing to the Lord and […]

Testimonial Letter for Reverend Kelly Kosky, South Africa “For as much as you have done this for one of the least among you….”         In my capacity serving under Ambassador Donald Gips, as Consular General representing the people of the United States in the Northern, Western and Eastern Cape Provinces of the Republic of […]

World Outreach Ministries, Inc. was established in 1979 and has a rich history of helping humanitarian workers and missionaries around the world. We serve as the Stateside office for these individuals and families and provide them with a variety of services. Each individual must successfully pass through an extensive application process. In over 40 years […]

Acknowledgement of Ethics and IntegrityReverend Kelly Kosky I met Reverend Kelly Kosky at a time of intense transition in my life. Our ministry was growing from a focus around one or two cities to a national model with multiple field offices. As a young director, it was new territory for me so befriending someone of […] 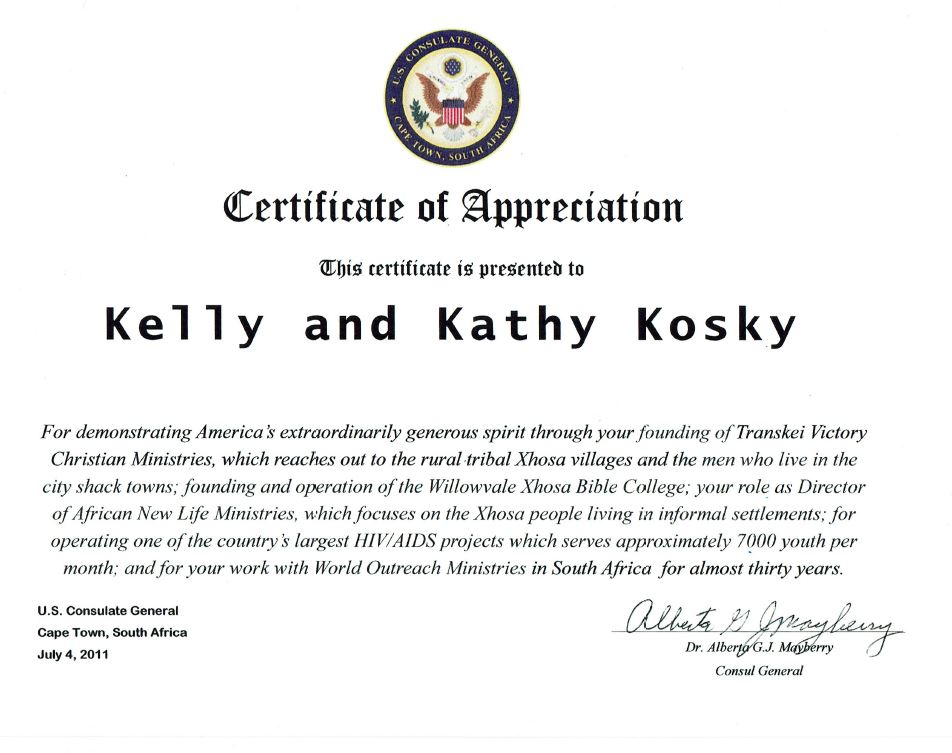 For demonstrating America’s extraordinarily generous spirit through your founding of Transkei Victory Christian Ministries, which reaches out to the rural and tribal Xhosa villages and the men who live in the city shack towns; founding and operation of the Willowvale Xhosa Bible College; your role as Director of African New Live Ministries, which focuses on […]

Achievement Award presented by amaXhosa King Mpendulo Zwelonke Sigcawu  to Rev Kelly Kosky at Nqadu Great Place on 18 April 2011 When I was a young man, I would often see Rev Kosky with my father, King Xolilizwe Sigcawu. Many evenings I would overhear them discussing a ‘better life’ for my people. In spite of […]

“For as much as you have done this for one of the least among you….” I am delighted to recognize an extraordinary U.S. citizen whose impact on this region is “legendary”.  Reverend Kelly Kosky, along with his wife, Kathy and their children, has represented the values and ideals of America for 22 years as of […]

In my official capacity as a governmental leader, I would like to thank Rev Kelly Kosky for his efforts help the disadvantaged people, in establishing the HIV / AIDS project, here in Khayelitsha, our largest township. Prior to Rev Kosky establishing this project, there was few resources for those afflicted with HIV / AIDS. But […]